What can 1918 teach us about post-pandemic tech adoption? 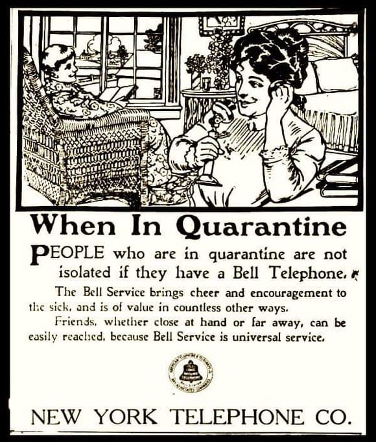 From pulse-dialling and flip-flop circuits to censorship and space travel, there is a lot we can learn about post-pandemic innovation from the 1918 flu. But, does any of it align with the current narrative of a surge in real estate’s tech adoption, post-COVID?

There is an increasingly energetic conversation taking place within PropTech about the rush in technology adoption we will see in real estate when COVID-19 loosens its grip on the world.

It’s an interesting projection with a lot of solid theory and anecdotal evidence to back it up. We are, however, still in the midst of this thing, so any uptick in adoption being recorded is no guarantee of continued growth once normality resumes.

We can’t know what will happen post-COVID-19, which means, for the time being, most companies, from real estate, technology, and beyond, are left treading water, waiting to see what happens next.

But wait a minute!

Maybe we can do better than guess what will happen in the future? We’re all familiar with the phrase, history repeats itself; so maybe history can tell us what happens next?

More specifically, if we take a look back to an earlier global pandemic; the so-called Spanish flu of 1918, and study what happened to innovation in its wake, maybe we can get a better idea of how humans react to danger and alter their behaviour in the face of a global crisis. Can we gain a more astute idea of what the near future holds for tech adoption?

As soon as you start reading about 1918’s flu pandemic, the parallels to today’s situation are striking.

In both cases, the virus originates in an animal and finds its way into a greedy human. This person spreads it to two more people, they spread it to four, and so on, until one of them travels abroad, taking the virus with them. Before you know it, it’s a global pandemic and, as true in 1918 as it is today, a huge proportion of the world’s population is forced into self-isolation.

In 1918, there were two major waves of infection, with the first striking in the Spring. It quickly became known as ‘The Spanish Flu’, despite its origins having nothing to do with Spain.

In fact, the name resulted from the Spanish press being the only ones to track and report their nation’s flu outbreak accurately while other nations, especially those finding their feet after WWI, censored the true scale of their breakouts. It appeared, therefore, that Spain’s epidemic was worse than anyone else’s and so the name was bestowed.

It was during this first wave of the 1918 flu that governments around the world started ordering people into quarantine.

We are seeing this happen again today and, as a result, many of us are turning to the innovation of video conferences to replace our typical methods of communicating, working, and socialising. ‘Let’s Zoom’ is the new ‘Facebook me’.

As such, a form of communication that relatively few people were familiar with at the start of 2020, has become the developed world’s hottest talking point. When we dig into the history books, we see how the same thing happened in 1918.

Back then, an ancestor of the video conference was advertised as the ultimate remedy to isolation: the telephone.

From saviour to enabler: the tragic flaws of the telephone

‘People who are in quarantine are not isolated if they have a Bell telephone’ read one 1918 newspaper ad for the New York Telephone Company.

However, as we all know, things are never that simple. These ads were published in the early days of the first outbreak, and well before infections peaked, the telephone was exposed as a lacklustre device in times of crisis.

In 1918, a phone call had to be connected through a switchboard, operated manually by a busy group of humans. While everyone else entered quarantine, these switchboard operators kept going to work. They were on the front line, fully exposed to the virus and it didn’t take long for many of them to fall ill.

Soon, so many operators were unable to work that the switchboards could no longer meet the demand for phone calls. By the time the second and most deadly wave of the virus hit, the same telephone companies who had previously hailed their product as the ideal solution were forced to publish more adverts, this time pleading with their customers to not make telephone calls while in isolation because the operators needed to process the most important emergency calls.

By 22nd October that year, The New York Times reported that 2,000 New York Telephone Company operators, almost a third of the workforce, were out sick.

It’s at this point, things get fascinating. Just as the weaknesses of the current telephone are being exposed, two English physicists are creating a new invention which will first address its biggest weakness, and then go on to facilitate the most important innovation of the century.

Innovation for the now and then forever

In 1918, William Eccles and F.W Jordan filed a patent for what they originally called The Eccles–Jordan Trigger Circuit, but would soon become better known as the flip-flop circuit.

Without getting too technical, a flip-flop circuit is a feat of electrical engineering which enables electronic information to be stored and remembered. The key word being remembered.

In the original patent, the flip-flop circuit was described as a “method of relaying or magnifying in electrical circuits for use in telegraphy and telephony.” In practice, the innovation made it possible to do something called ‘pulse dialling’.

Pulse dialling is a process which sees a series of electronic pulses sent down the telephone wire. On a rotary phone, when you turn the dial, a series of pulses are sent out, with each dialled number sending out a different pulse.

Eventually, these pulses add up until there is just one possible destination for the call and the connection is made. Because the flip-flop can remember and count the pulses, it removes the need for manual operators to know where to send a call.

As already stated, a flop-flop remembers electronic information. But to be more precise, each flip-flop remembers 1-bit of data. Stack eight flop-flops on top of each other and you have an 8-bit memory.

Random Access Memory (RAM) is a concept we are all familiar with – it enables a computer to remember things and, therefore, function. With no RAM, there is no computer.

And what exactly is RAM? It’s little more than a stack of flip-flops.

Add all of this up, and it means that, in 1918, the flu pandemic revealed the telephone to be flawed, so two people invented a way to improve it. Decades later, the same invention was a key component in the computer, which leads us to today, where Zoom is being marketed as the ideal solution for isolation: ‘People who are in quarantine are not isolated if they have a Zoom connection’, you might say.

I like this story a lot. Not only is it a valuable lesson in the evolution of an idea, but also proof that human creativity is a baton which we run with and then pass on to the next.

I wonder which of the innovations to rise out of the 2020 pandemic will be the one to plant a seed deep into the soil to be harvested by tomorrow’s innovators?

With this story of the telephone in mind, we can look again at the rise of video chat.

From the earliest moments of this year’s quarantine, Zoom-et-al. have marketed themselves as the best solution to isolation.

But, just a few weeks into quarantine, video conferences are already starting to expose themselves as an imperfect solution. History is repeating itself.

First, there are the obvious technical issues with video chat – poor internet connections, pixelated images, lag, stilted dialogue – but, as we spend more time with the technology, deeper and more troubling flaws are starting to show.

A recent article in National Geographic takes a comprehensive look at a recent phenomenon becoming known as Zoom Fatigue.

You can read the article in full here, but, to summarise, it outlines the extent to which we all struggle with video calls. The truth is, our concentration levels on these calls are always poor.

As stated in the article: “Think of how hard it would be to cook and read at the same time. That’s the kind of multi-tasking your brain is trying, and often failing, to navigate in a group video chat.”

Furthermore, video chats remove many of the most essential, non-verbal, elements of human communication.

“During an in-person conversation, the brain focuses partly on the words being spoken, but it also derives additional meaning from dozens of non-verbal cues, such as whether someone is…fidgeting while you talk, or if they inhale quickly in preparation to interrupt.”

We might forgive these limitations when talking with friends or family, even colleagues, but when it comes to clients, investors, or directors, the inability to read between the lines and infer from the silences can turn a once confident communicator into an inarticulate meanderer.

When your charisma is taken away, much of what you rely on to gain the trust and belief of those around you is taken, too.

These flaws suggest that there is much room for improvement with video conferences. I’m interested to see how this story plays out, not least because, when the innovation does arrive, it will be a great example of how changing societal behaviour, caused by a global pandemic, can drive improved innovation.

If history is anything to go by, this pandemic will indeed bring great technological change to our industry, and to our society as a whole.

It will teach us to improve some of the things we already have (be it through innovation or increased accessibility) and to replace those which are, previously unknown to us, broken.

It will drive our behaviour to change and thus give technology new problems to solve.

The innovations which come from this pandemic will not only have short-term impacts, but unpredictable, unthinkable, long-term impacts, too. We just have to look at the flip-flop circuit as proof of this.

To close this article, I’d like to share a story I came across while researching this piece. I think it’s a suitable lesson in practicing caution when predicting what the future has in store.

In January 1918, The New York Times published an article which ridiculed rocket scientist Robert H. Goddard, stating that spaceflight is impossible and that all attempts to have a human walk on any other planet is a waste of time and tax revenue. In 1969, as Apollo 11 made its final approach to the Moon, the paper was forced, with great embarrassment, to publicly retract this position.

This article originally appeared on EG, on Wednesday 6th May, 2020.